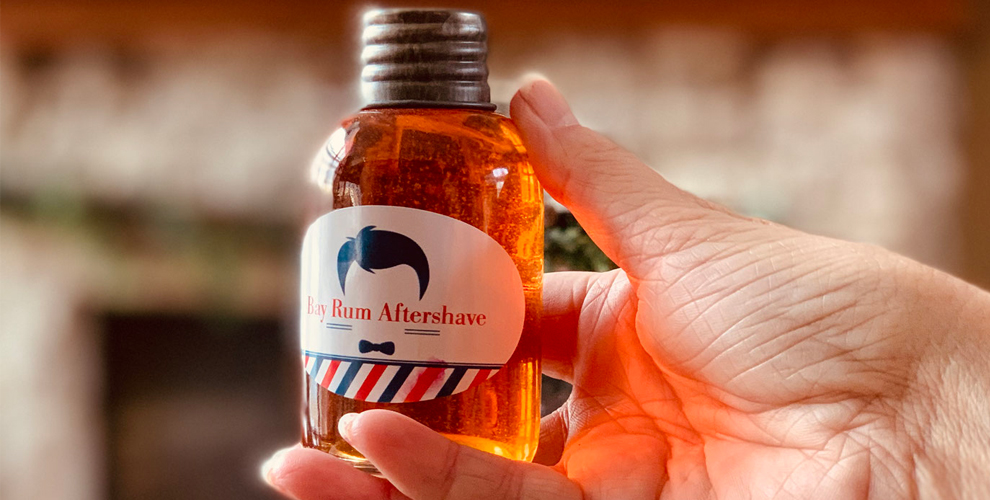 Bay rum aftershaves were originally manufactured in St. Thomas and West Indian Islands around the 1800s by boiling bay leaves in rum. Today, the process has evolved, and bay rum aftershaves are prepared by combining bay oil with other citrus and fragrant oils.

Now that you are here, you must have decided to switch from regular aftershave to a bay rum one. But, out of the many bay rum offerings, how do you pick the best bay rum aftershave?

Fortunately for you, RazorHood has done all the groundwork by reviewing different product offering for you. Based on our analysis and in-depth study, we have come up with the bay rum aftershave reviews for some of the most popular products. We believe that this bay rum cologne review will enable you to make an informed choice.

So, let us get started and take a look at the bay rum cologne reviews to help you find the product that best fits your needs and preferences.

Top of the list for best bay rum aftershave is the Barberry Coast Bay Rum Aftershave No. 28. It is available in a standard quantity of 7 Ounces bottles.

Handcrafted to perfection and aged for 30 days, this aftershave is made from the finest bay leaves from West Islands. This aftershave is a mix of essential oils and exotic citrus fragrances. You can actually smell all the distinct ingredients separately in this one. Well, there is more to it. It is an all-natural vegan, paraben-free product filtered and aged to perfection with no added GMO oils. It has glycerine in it, which will keep your skin well moisturized and nourished. Its antioxidant properties will help you deal with razor burns too

You might feel a slight burning sensation after applying it, but that’s totally normal. In fact, you’ll like that sting, and it will refresh your senses instantly.

Regardless of the high price tag, people love it and shop for this best bay rum scent.

It gets its name from the British Royal Navy and has a strong clove undernote to it. The other ingredients include rum, essential oils, glycerin, witch hazel, and alcohol. Though it gets absorbs quickly in the skin, the scent does not linger over for long.

The only problem with this best bay rum scent is that it has a bit of a burning sensation. We do not recommend this aftershave for people with sensitive skin.

Next in line for the bay rum aftershave reviews are the Clubman Pinaud Bay Rum aftershave available in 12 Fl Oz. It is a 100% cruelty-free product manufactured in the USA. You may apply this aftershave post-shaving or even in between shaves for a cool, soothing effect.

It smells quite like the golden era’s nostalgia. The scent of this aftershave is very strong, with overtones of classic cloves and cinnamon suitable for every occasion. Unlike the traditional bay rum aftershaves, it does not have any rum in it. But, it gives you a similar scent with the help of synthetic ingredients.

This aftershave moisturizes the skin and helps you fight the skin irritation caused due to shaving. It provides you a soothing effect post-shaving. However, if you seek a bay rum aftershave to be used as cologne, this isn’t the best fit. Also, the synthetic ingredients may not suit everyone, especially people with sensitive skin.

Taking the review forward, we can say without any ounce of doubt that Ogallala is, hands down, is one of the best offerings in the bay rum aftershave world. Its fragrance takes you back to the old-fashioned barbershops.

This made in USA product is available in an 8 Oz retro Cobalt Blue colored bottle.

This Ogallala Genuine Bay Rum aftershave has a unique mix of bay rum oils, sandalwood, alcohol, water, and witch hazel. It has a vintage woody aroma that is strong but yet not pungent or overpowering. The fragrance is very similar to the original bay rum aftershave lotion, only milder and better.

This product is quite multipurpose, if you ask. It not only works well as an aftershave but also it is one of the best bay rum cologne. You can even use it pre-shave or as an aftershave. It hones some excellent skin healing and toning properties. However, we suggest you use it sparingly and not in large quantities.

We find the price okay too. It is affordable, neither too high nor too low, compared to the many other options included in our bay rum cologne review. More so, the customer service team of the brand is excellent.

However, people have complained of getting a rash after using it. So, the best is to do a patch test on a small area before a full-scale application onto your skin.

Let’s talk about one of the oldest creators of bay rum aftershaves and their best bay rum scent – St. John’s. It is available in both splash and spray packaging (4 Ounces and 8 Fl Ounces). The ingredients that go into this aftershave include superior quality bay leaf oil, cinnamon, cloves, and eucalyptus essence, and other Caribbean spices. The smell is hard to describe, but the thing is that this aftershave does not cause a burning sensation. You’ll just feel a mild tingling.

One of the most distinguishing features of this aftershave is its fishnet hand-woven packaging design. It looks classy and stands out from all the other products.

One thing to mention in the St. John bay rum aftershave reviews is that the fragrance is short-lived. But, keeping that aside, it is the best bay rum cologne and aftershave combination there is.

We have included this in our bay rum aftershave reviews because this best bay rum cologne is incredibly light on the skin with a light scent. It isn’t overpowering at all.

There are a few downsides to this one that we have come across. Firstly, it does not last as long as many other aftershaves. Secondly, the packaging could be improved.

Last in this bay rum cologne review is the Gilbert Henry Bay Rum Balm (4 Fl Oz). It is also one of the best bay rum aftershaves and is a natural solution for redness and razor burns.

It has a distinct smell that is spicey yet subtle and non-disturbing. The smell is hard to describe, but you will definitely feel a tint of sweet orange and bay leaf at the beginning, which deepens further into strong-smelling sandalwood.

First of all, look at the brand and what is the general word about the brand in the market. Is the brand trusted enough? Also, different brands stand for different things. Choose a brand that best resonates with your personality and offers good quality products.

Ask yourself if you wish to buy an aftershave to just soothe razor burns, or do you need a multipurpose pick that acts both as a cologne and aftershave.

Before you shop for the best bay rum aftershave, you need to scrutinize the label and read through the ingredients. The fragrance of the aftershave will depend upon what goes in its making. So beware that the strong ingredients used will result in a strong-smelling aftershave only.

For oily skin, you should opt for the best bay rum aftershave that is alcohol-based. It controls the excess oil production and dries the skin out. However, if you have dry skin, pick a non-alcoholic or low alcohol content aftershave. You can go for the ones that have moisturizing agents such as aloe vera, glycerine, and coconut oil, etc.

Check before buying if you wish to buy a natural product or one with chemical ingredients. We suggest natural ones for people with sensitive/irritation-prone skin.

The packaging should be sturdy, and the bottle should be travel-friendly. Also, a pump and spray bottle is highly recommended for comfortable use.

It is ideal to pick a product that has a mix of both healing and moisturizing properties to soothe razor burns and also provide the needed moisture.

Make sure to a product that is value for money and lasts for at least a month, unless you don’t have a problem running to the store mid-month.

Ques 1. How does the bay rum smell?

Ans. Well, to be honest with you, there can be umpteen possible answers to this question, based on the familiar scents to give you a crisp idea of the bay rum’s scent. Of course, the smell will be a mix of bay leaf rum and even clove, but we had to describe it more poetically; we’d like to take you back to the older days, the age of your great-grandfather, and even your grandfather – Time for the hectic updates to the second within reach, a time of the cigars and the woolen suits.

Now, take another pause, and think of an ideal father, a perfect man. He will probably be a strong man with a full beard, which has been neatly trimmed, someone who can repair his car all by himself with his bare hands and absorb all the antics of his children without ever looking. Consider all that he had to bear to become all of that. Now, relate it to bay rum, and imagine that the bay rum is an ingredient that goes into the making of our above-described masculine man.

Ques 2. Can we use the aftershave as a cologne?

Ans. Well, technically, the two of them aren’t the same thing. Aftershaves were meant to soothe the freshly shaven irritated skin, and colognes were used to keep yourself smelling nice.

However, over the years, you have products that are originally aftershave but also have a great smell. So, they can be used both aftershave and cologne. But, even the best bay rum cologne or any other cologne, until not mentioned on the packaging, cannot be used as an aftershave interchangeably.

Ques 3. Why does an aftershave smell differently in different people?

Ques 4. Primarily, what is the difference between a regular post-shave lotion and the bay rum Aftershave lotion?

Ans. A regular aftershave is different from a bay rum aftershave on the basis of its ingredients.

Bay rum aftershaves have to have their signature ingredients, i.e., bay leaves and rum (in some form).

Also, due to the use of these two ingredients, bay rum aftershaves have a more deep and woodsy scent with strong spicey undertones.

Today, a good aftershave and a beard trimmer are a must have for every man. We want to conclude by saying that the bay rum aftershaves have made a comeback so don’t forget to try them out. The best bay rum aftershave that you can find in the market are renowned for their masculine scents and their antifungal, antibacterial, and overall therapeutic properties.

When searching for the best bay rum cologne or aftershave, always bear in mind that if you want to pick what’s best for you and your skin, you need to keep in mind the different factors of consideration that we have mentioned above.

Further, before you head out to shop for the ideal aftershave or cologne for yourself, please know what you are allergic to. More so, before investing in any new product, do test it.