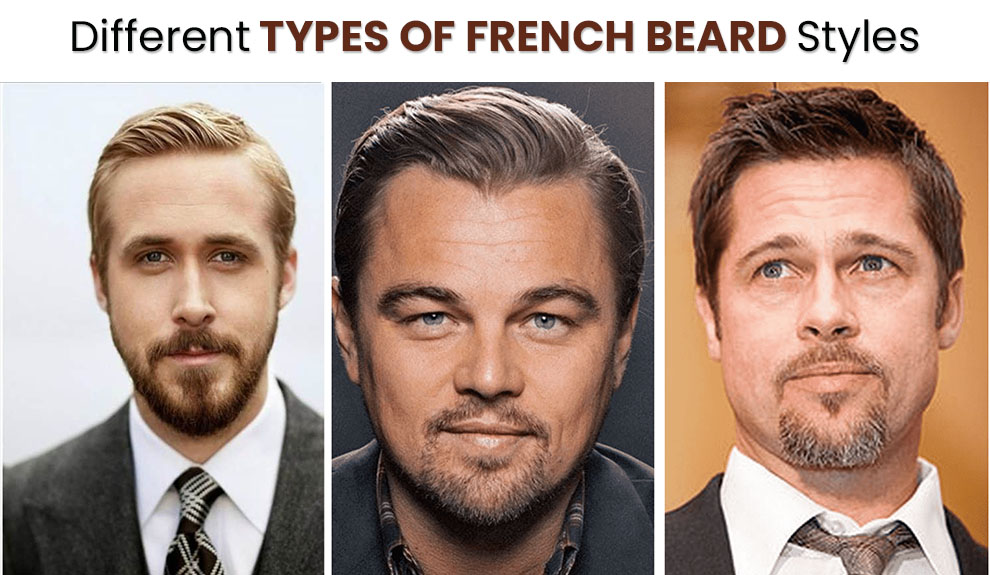 A French beard is one of those trends that never really goes out of fashion. However, over the years, this beard style has successfully adapted and moulded itself according to the preferences of modern men.

A French beard or a French cut beard is a style where the beard (usually) grows towards the chin’s apex. Although other areas of the face may have some hair, the focus remains on the French cut area.

This classic mustache and beard combo encircles your mouth and can be combined with other beard styles like a chin strap or a soul patch.

If you want some aid in selecting suitable french cut beard styles, you’ve come to the right place! Here is all you want to know about choosing, growing and maintaining a French Beard.

Here are a few popular mens French beard styles for you to choose from:

Plan to try out different types of french beard styles for the first time? This option is a good place to start. To get this style, simply grow a stubble and then trim it in a French beard style.

Soft stubble with an edge, this clean beard look is perfect for guys who do not have a good facial hair growth or don’t wish to keep a full beard. Regular trimming will be required to keep your beard from growing out.

A W-shaped French beard involves growing a soul patch on the chin that leads up to the lip area, forming a ‘w.’ If you want to keep it light and effortless, go for a W-shaped beard with a patchy disconnect between the mustache and the beard.

This versatile French beard variant can be grown in both thin and thick types of French beard.

Here is another excellent option among the best French cut beard styles. A square French beard can make your jawline appear more angular and defined, giving you a bolder, macho look.

This is what makes this beard cut perfect for people with rounder faces. All you need to do to get this style is create angular sections at all four corners. Straighten edges will also add more charm to your square French beard.

Those who have great hair growth on their cheeks and along their jawline can incorporate all the extra hair into their French beard.

To get a chin strap, leave a line of hair along the jaw instead of shaving your cheeks clean. This uber-masculine French beard style works well in almost every setting.

If the uber-masculine is not really your thing, these mens French beard styles are perfect for that approachable, guy-next-door look.

Unlike more angular professional French beard styles, the curves in a rounded chin French beard are much softer. Pair it with a mustache and a patchy disconnect (between the ‘stache and the beard), and you are good to go.

If you want the best French cut beard styles that are trendy but subtle, soul patch is just the style for you.

To get this style, all you need to do is grow a small patch of hair below your bottom lip and then trim it into a tapering ‘v.’

Now surround the soul patch with a wide French beard and your look is ready. But make sure to keep the soul patch long and thin. This look may require a little maintenance and regular trimming, but it is definitely worth the effort.

This style involves a beard that is cropped tightly around the lips. This type of French beard style will give you a suave look while highlighting your bone structures and facial features. The fuller your beard is, the more intense and masculine your look will be.

This compact style is a great option for men who want a long and full mustache and beard without appearing too messy.

Probably one of the best professional French beard styles out there, this option will give you a classy yet rugged look.

One of the best French cut beard styles that have been trending for quite some time is the French beard paired up with a handlebar mustache. Not a lot of men have the confidence to carry a handlebar mustache well. But if you believe you can pull this style, it will definitely make you stand out!

An intense bearded look is not everybody’s cup of tea. But that does not mean that you have to give up on beards completely. A thin French beard is a go-to option for folks who want a sleek and clean bearded look.

This gentle yet masculine look can be carried out with confidence at formal as well as casual settings.

How To Grow A French Beard?

Who Should and Shouldn’t Have A French Beard?’

Best French cut beard styles can be a great option for someone who is looking for something trendy but easy to create and maintain. This category also gives you a lot of room for experimenting with your style.

French beards don’t really go out of fashion so if you want to stay up to date on fashion trends, go for a French beard.

Trying out different types of French beard styles is highly recommended for guys who have good facial hair growth and can grow a thick (and not patchy) beard. This style works exceptionally well for men with slimmer faces, thin cheeks and strong cheekbones.

People with a unique fashion sense who don’t want anything remotely traditional must be very careful while deciding how to style their French beards. If not styled properly, professional French beard styles may end up looking too traditional or boring.

Round and fuller cheeks may appear rounder when sporting a French beard. However, different types of French beard styles work quite well for round and oval faces.

To put it simply, French Beard is a category while Van Dyke is a particular style.

Earlier (and sometimes even now) both the terms were used interchangeably.

A French beard, originally, referred to a style where the mustache and beard were distinct and separate.

A. A French beard is known as a French beard or a French cut beard because the style originated in France. This has been a popular style in France for a few centuries.

With time, the French beard has undergone quite a few changes. The category now comprises of French beards that are popular among modern men all over the world.

Q. Is French beard in fashion?

Q. How do you shape a French beard?

A. The way you shape your French beard depends on the style you have decided to go with.

For thick and long French cut beard styles, you need to let your hair grow out before removing the edges and trimming them into a shape.

Start by trimming the longer hair and then gradually move to shorter settings till you reach the desired length. Once you are done trimming, do a final shave to get rid of extra facial hair.

Q. Which are the different types of French beard styles for a round face?

A. If you have a round face, you’d probably like to go with something that’ll give your face structure more length and definition.

Q. Which are the French beard styles for oval faces?